We have simplified and reduced pricing across the board so that you can now visit the farm, any time of day or night for a simple, single charge of £15 per person.

Full pricing information can be found on our pricing page.

For the most up-to-date information on everything going on at the farm, please join our Facebook page where new information will be announced first. 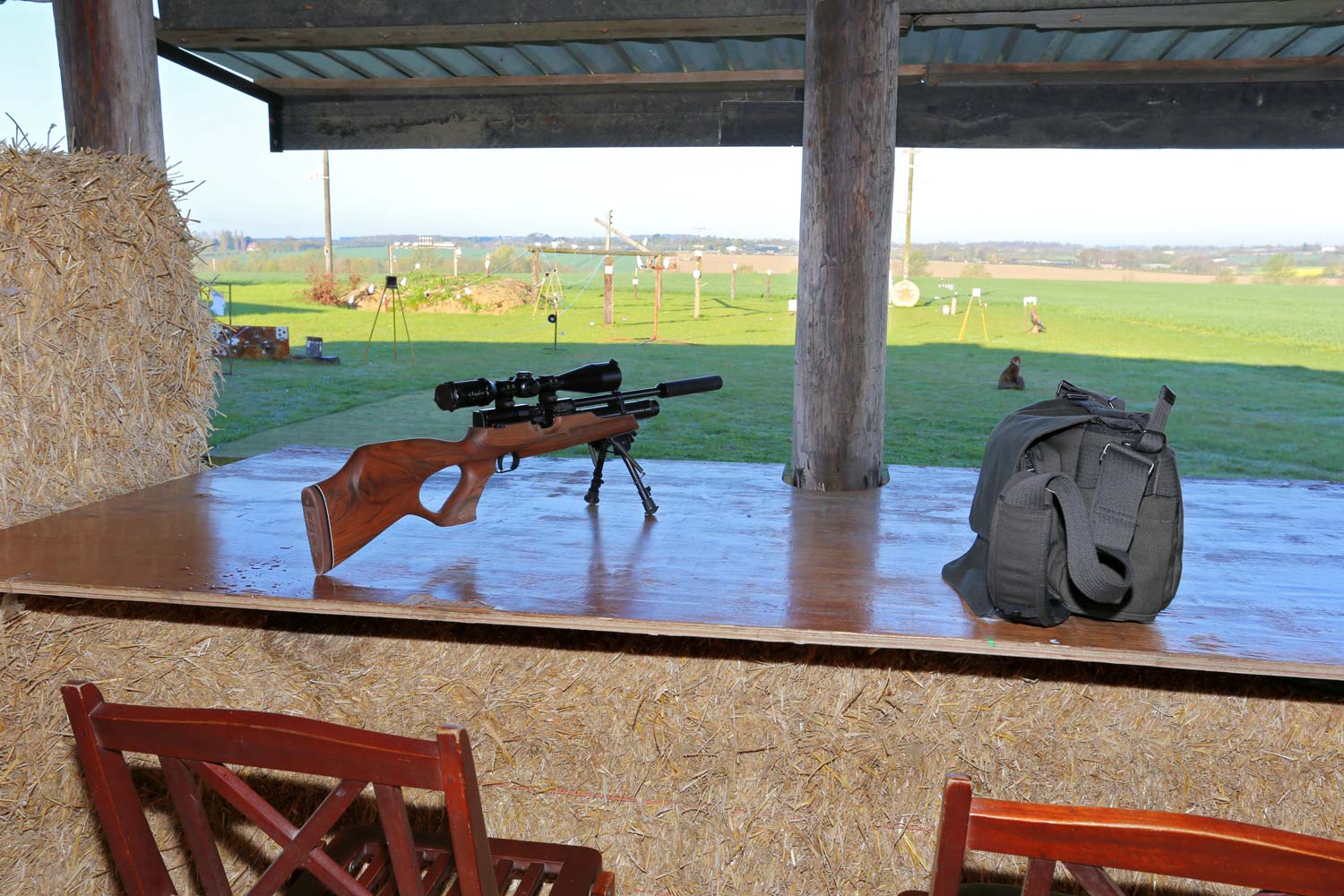 So I picked up a BSA Ultra a couple of weeks back from the Airgun Center (Great service, and above all, really genuine and helpful with all of my silly/idiotic questions!)

Decided that crawling through mud etc is not for me, and thought I'd look to see about this Farm owned by some guy called Pete. A phone call to “book in” with him was done, and today at 10am was the time set.

After a small amount of difficulty finding his farm (please don't ask me where it is, although I can say its near colchester!) me and a mate arrived shortly before 10. With a phone call to Pete, we we asked to wait a few mins as he was spraying one of his fields! No worries we thought! More time to get excited! Haha.

So along comes Pete, who is definitely not the stereotypical farmer!

After introductions had been made, he explained to us the nature of the induction, and gave us a tour.

Petes farm is amazing. So after all the necessary forms are checked, and a disclaimer signed : he left us to it. (please don't think that because I haven't included all of the induction, that it doesn't consist of much) Petes main aim (excuse the pun!) is safety. Obviously it's very important, but to Pete it seemed more important than anywhere I have been before, which was very refreshing!

So time to begin (we stuck with the indoor range, as, as nice as it was outside, we were both relatively new to Airgunning, especially me, as I had never used a PCP before, and it had been maybe 15 years since I last fired a springer!) after doing my best to zero my scope, I got it to a stage I was happy with. Plinking some 20 yard targets and resets with ease! So onto the 30's!

This is where it went wrong : grab my Hills Pump, and DOH, hadn't screwed in the adapter, so more air was rushing out of the adaptor, than into the gun!

Fortunately, Pete was in the yard and was happy to lend me a pair of spanners to tighten the fixing! Awesome!

So we're now hitting some 50 yarders with regularity! I'm grinning from ear to ear, when DOH! My mate decides to double load his Rifle! Luckily, Pete was there again to save the day! Few mins later and were back on track!

After 6 straight hours of plinking and zeroing, and trying to understand the power curve of my rifle (not a hope yet!!) we decided to call it a day!

If Pete does read this, I'd like to say a huge thank you from both myself and Karl, we had an epic day! And you can be sure to see us again!

Honestly everyone, if anybody lives even remotely near, you really have no excuse! I'm so glad we chose to shoot there!

Maybe I'll see you down the range!

Well Wednesday at Pete's Airgun Farm was an brilliant day out. I met Pete at 8.30 for a safety briefing and a quick tour of the facilities. All in all I was very impressed with the set up. The outdoor range, with it's under cover shooting positions has had a change in orientation and although there are many and varied targets, new one are to be added very shortly. The shooting position at the outdoor range looks over a vast amount of Pete's farm.

The indoor range is well lit, with shooting benches for up to 14 shooters. Dedicated bottle rack, with charging table and workbench above. There are plenty of cushions and the like for use as rifle rests. For me the day was all about completing my pellet testing, however this was not to be the whole case. I started with AA Diabolo Fields and zeroed the rifle at 35 yards. I expected for it to take me some time to achieve pond sized groups, but after 40-50 shots I was achieving groups fractionally under 5p in size.

After a break for a cuppa, all of which are available at a reasonable 50p per cup, I used my chrono to check my mate's 4 rifles. All under 12lb/ft as expected, so no dramas there. The drama was to unfold when I changed to Bisley Magnums, which had produced extremely tight groups at 20 yards, and were now all over the place at 35. To be honest I was very disappointed with the results. Time for lunch and a very critical analysis of the Bisleys.

After lunch I got started with Falcon Accuracy Plus. These quickly grouped and restored my confidence in it's inclusion in the showdown. After shooting 40 of the 80 I had, I decided to start bashing the multitude of knockdown and spinner targets. This put a huge smile on my face. I was able to, with some holdover adjustments, hit targets out at 50 yards. Decided to abandon my pellet test and just enjoy the knockdowns and set about doing so, with almost a whole tin of AA Diabolo Fields. My highlight of the day, was when I was able to hit a bell, which was placed behind a metal plate and in order to ring the bell the pellet had to pass through a small hole (10mm I guessed) in the metal plate. I had to use about 1 3/4 mil dot holdover to ring the bell and once I got the holdover correct I rang the bell 5 times on the trot.

So all in all a great day at the range and I must say a huge thank you to 3 HFT shooters who offered great advice, especially with my standing stance. My sincere apologies for not remembering all of your names gentlemen. Initially I declined a very kind offer to use some JSB Exact Express Diabolo pellets I was offered. After I explained that my rifle would not group at 20 yards with the JSB's I had already tried. Dave simply said you tried the wrong ones, just give them a go and see. Well he was spot on. Two sub 5p groups of 5 pellets, left me quite godsmacked. Dave went on to tell me all about the pellets my rifle should be well suited to.

I went on to discover that my S510 superlite is not as well balanced as I had initially thought. During an attempt to shoot from a standing stance, it was as much as I could do to hit an A4 card at 35 yards. Another of the HFTers asked if he might handle my rifle, which I was more than happy to allow. Oh it's light isn't it, he said and with that he offered me his BSA Scorpion SE to shoulder. Now this BSA rifle was felt much heavier than my S510, but astonishingly I was able to hold a steadier sight on the A4 card out at 35 yards. I was able to hold a heavier rifle much steadier, because of superior balance. This now has me thinking about spending a day in the rifle shop evaluating a rifle better balanced for me.

So, will I visit Pete's again? That would be a resounding yes.